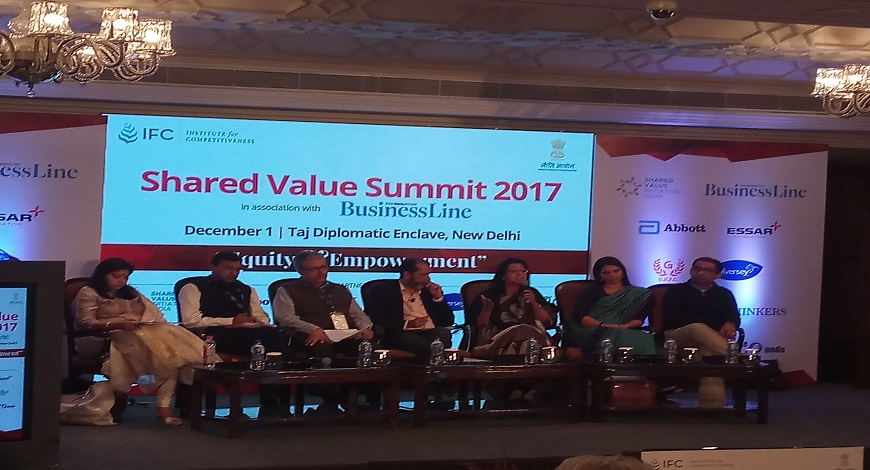 “Think-tanks play a very important role in the space of public policy and the discourse on the changing society and its facets. It is very important that people are going beyond 150 characters for engaging in important political and social issues,” Yamini Aiyar, President and Chief Executive, Centre for Policy Research

On December 1st, the Shared Value Summit 2017, co-organized by Institute for Competitiveness and NITI Aayog, took place at Taj Diplomatic Enclave, New Delhi. The event brought together diverse stakeholders (corporates, NGOs, women entrepreneurs, government, development institutions, and academicians) on a common platform to identify and address the barriers to equality and empowerment. There was a panel discussion during the event, on reframing societal needs, moderated by Hoshie Ghaswalla, CEO, BW Engage, BW Businessworld.

Naina Lal Kidwai, Chair, India Sanitation Coalition and Past President FICCI said, “The role of India Sanitation Coalition is to be a platform for all players in the sanitation sector to convene. In the world of sanitation, 1600 kids die of diarrhoea every day, but it doesn’t make front page news. 30% of diarrheal deaths happen in India. Because of these issues of diarrhoea and poor nutrition, children grow up stunted. What we have right now is an open door from the government and open hearts from the citizens. Sanitation cuts across every vertical. It is also about documenting best practices so it can be replicated across the country”. She also added, “Water Aid working with local NGO operators had ensured that the panchayat head to work on the issues. We may knock the district collector and the government but when it works, it works.

“We generate clean energy. We generate close to 3.5 GW of clean energy, offsetting a lot of carbon emissions. A lot of what we do is working towards being a good company. It’s very important for us to engage in the ecosystem in a very positive manner. We have seen that people themselves are very powerful, and when they determine to do what they want to do, they become very powerful partners. We have seen active participation from the local communities. I see millennials wanting to work in companies not only because of the salary, but the change the company can bring around. Amongst youngsters, there is an inclination to becoming the change they want to see,“said Vaishali Sinha, Director, Renew Power.

Neeraj Jain, India Country Head, PATH, said, “We focus on innovations to be scaled up to impact people at the bottom of the social pyramid. We also work in the sector of TB, HIV, Malaria and multiple other communicable diseases. We strongly believe as an organization that multiple stakeholders need to come together for impact. Only when different stakeholders come together can impact be created. We have to accept that we all have different agendas, but work together on common goals. The development sector can play a convening catalysing role in bringing all the actors together.”

“Our vision is guided by the new sustainable development goals, especially goal no. 6. Unless it is institutionalized, organized demand from the ground, no policy can work. There are mandated institutions, but they are not really functioning. We take a bottom-up approach. We won’t get make changes bottom-up unless we fix the system. Policy is very important, but we work on-ground and draw lessons from the experiences on-ground. There are communities left behind, there are contextual differences. We are working on solutions which not only need to enter the mindset of the policymakers, but also all the way through the supply chain and delivery mechanism“, said Avinash Kumar, Director- Policy and Programmes, Water Aid.

Yamini Aiyar, President and Chief Executive, Centre for Policy Research, said, “Think-tanks play a very important role in the space of public policy and the discourse on the changing society and its facets. It is very important that people are going beyond 150 characters for engaging in important political and social issues. And supporting think-tanks is even more integral, seeing the way political discourse is being shaped in this country. Election after election, you hear our government or politicians say we have great policies but we see poor implementation on the ground. The blame game is played but no real action is taken. No one is holding the system accountable. How do we ensure that the government is accountable for the policy being implemented? It’s about strengthening our institutions and making it accountable to deliver what it was supposed to do.” She also added, “In order for an informed citizenry to make changes and put pressure on the government, we need a system which is responsive and can change. We often confuse accounting for accountability. We have to be able to trust our democracy and allow it function properly”.

“It’s really enlightening to see that such gatherings around shared value and to get the dialogue. There are 3 types of barriers to solving problems especially in sanitation- one is our information gap, second is the friction due to culture and third is financial friction“, said Nirat Bhatnagar, Associate Partner, WASH Practice Leaders, Dalberg Advisors.

The coverage was done by BW Businessworld on December 4, 2017.