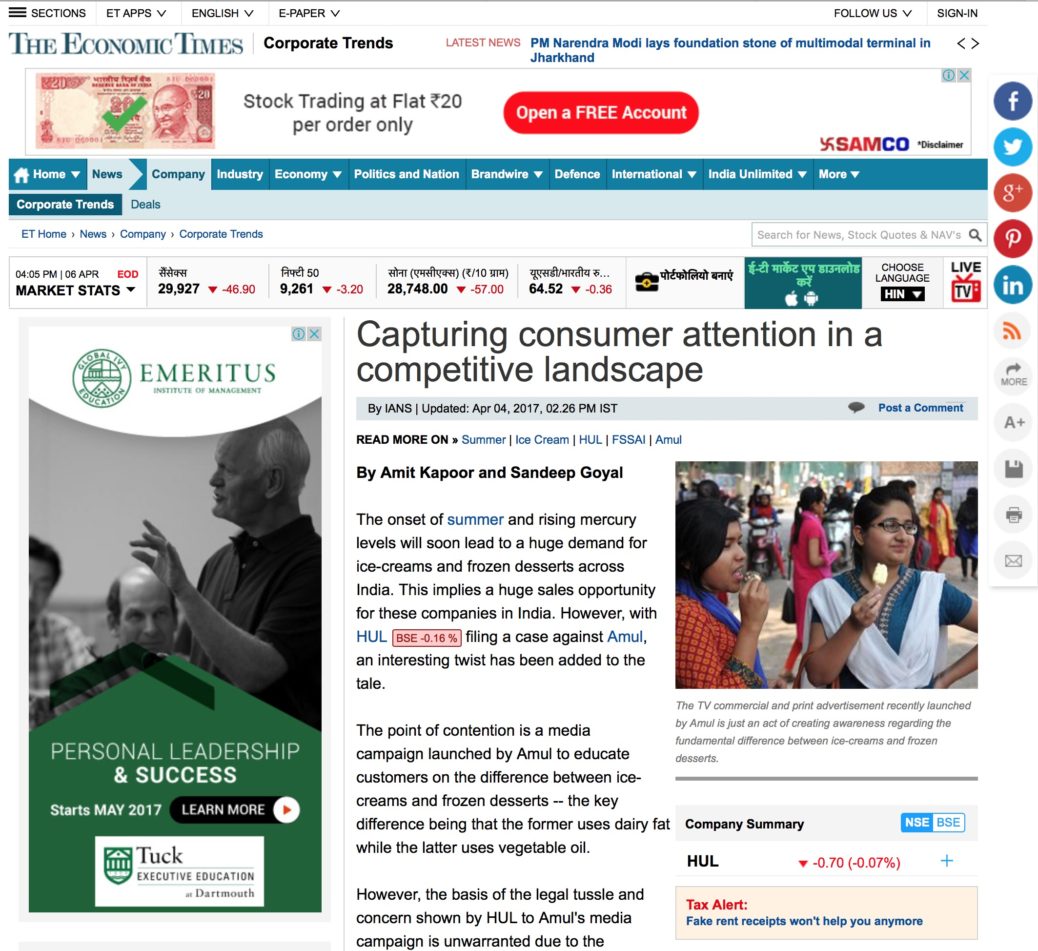 The onset of summer and rising mercury levels will soon lead to a huge demand for ice-creams and frozen desserts across India. This implies a huge sales opportunity for these companies in India. However, with HULBSE -0.16 % filing a case against Amul, an interesting twist has been added to the tale.

The point of contention is a media campaign launched by Amul to educate customers on the difference between ice-creams and frozen desserts — the key difference being that the former use dairy fat while the latter uses vegetable oil.

However, the basis of the legal tussle and concern shown by HUL to Amul’s media campaign is unwarranted due to the following reasons:

Firstly, the TV commercial and print advertisement recently launched by Amul is just an act of creating awareness regarding the fundamental difference between ice-creams and frozen desserts. The whole idea is to allow the consumer make a conscious choice while trying to soothe their taste-buds and beat the summer.

There are just a few who really understand or appreciate this difference while making a purchase despite the labelling as per Food Safety and Standards Authority of India (FSSAI) guidelines. In such a scenario, communicating the facts or creating awareness about the ingredients of the product offerings always builds trust and transparency with the customer and should be encouraged by all companies.

Secondly, HUL’s apprehension regarding negative publicity and impact on its sales is unfounded — the reason being that the campaign does not say that other companies are making a false representation on their product labelling. It is simply highlighting the difference between ice-cream and frozen dessert as per the technical definition by FSSAI. This kind of messaging that empowers customers to make conscious choices should only be encouraged.

As of now, a majority of the consumers in India buy ice-creams or frozen desserts sold by ice-cream carts and shops on the assumption that they are buying ice-creams.

Thirdly, the ice-cream and frozen dessert industry has been growing in India at an average of 15-17 per cent. The growing demand potential is also evident from the entry of local and multinational players like Naturals, Havmore, Fresh and Naturelle, Cocoberry, Hagen-Dazs and the like.

Both Amul and HUL carry a strong brand appeal of quality product offerings in this industry and maintain strong market shares in India. So, it is unlikely that consumers who like HUL’s frozen desserts and ice-creams will make a shift to Amul or other ice-cream brands.

The taste, pricing, ease of availability and variety are some of the dominant factors in making a choice of an ice-cream or a dessert. HUL is as strong as Amul on all these aspects of value offerings, creation and delivery. The concern by HUL regarding switching of customers to the ice-cream players simply due to media campaign by Amul lacks sufficient appeal.

The companies must realise that the rules of the game are changing with their trying innovative ways of capturing consumer attention in a competitive landscape. There are two ways to compete in India. One, the businesses can fight for survival in the existing markets by focusing their budget and resources on advertising, star campaigning and premium product positioning. Two, the businesses can choose to act differently by focusing on shared value orientation in terms of defining new products or markets or networks for value creation and delivery.

The companies can deliberate on the following questions to decide upon the winning combination: What kind of product offerings in a specific industry provides more value to the target segment? How can the companies reconfigure their value chain to create a positive social and environmental impact-based differentiation? What kind of engagement models can be designed to bring together the marginalised people from the poor communities as suppliers, employees, or micro-entrepreneurs across the value chain?How can the companies redefine their business model to target the rural markets for their offerings?

These are the kind of questions that will define the future of every industry in India. The sooner companies realise this reality, the better will be their chances of survival.

The article was published with Economic Times on April 4, 2017.