Modi Government Rolls SDGs Despite Of All Odds, Says Debroy 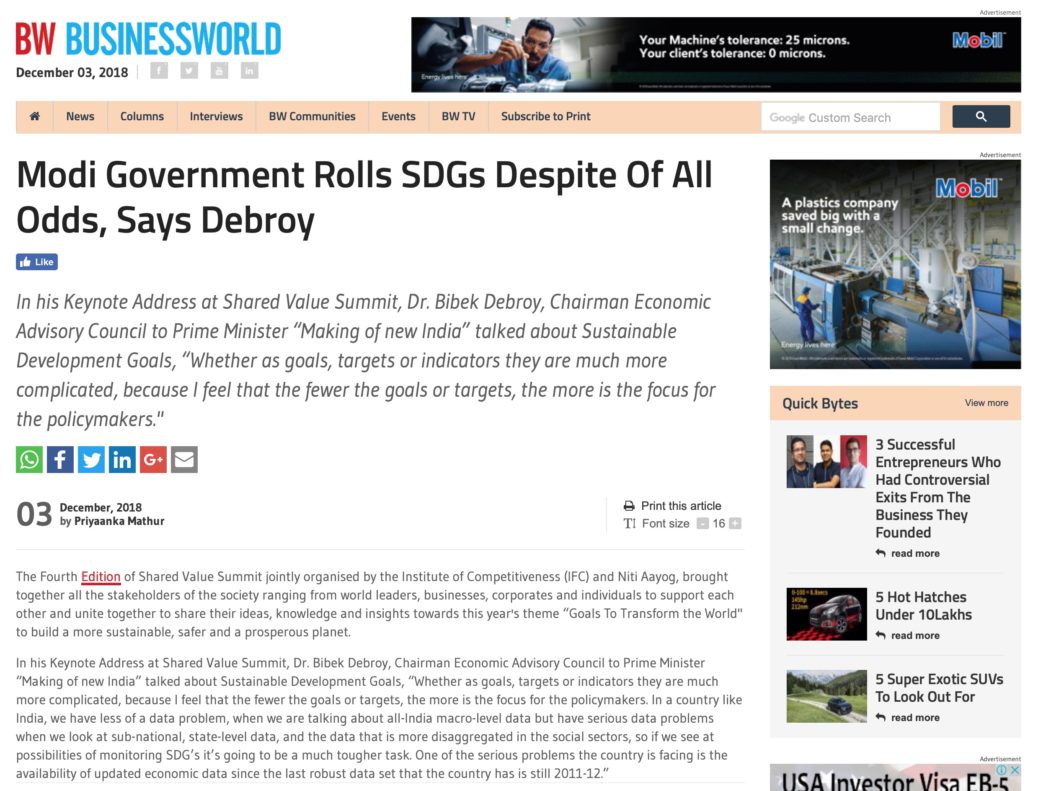 In his Keynote Address at Shared Value Summit, Dr. Bibek Debroy, Chairman Economic Advisory Council to Prime Minister “Making of new India” talked about Sustainable Development Goals, “Whether as goals, targets or indicators they are much more complicated, because I feel that the fewer the goals or targets, the more is the focus for the policymakers.”

The Fourth Edition of Shared Value Summit jointly organised by the Institute of Competitiveness (IFC) and Niti Aayog, brought together all the stakeholders of the society ranging from world leaders, businesses, corporates and individuals to support each other and unite together to share their ideas, knowledge and insights towards this year’s theme “Goals To Transform the World” to build a more sustainable, safer and a prosperous planet.

In his Keynote Address at Shared Value Summit, Dr. Bibek Debroy, Chairman Economic Advisory Council to Prime Minister “Making of new India” talked about Sustainable Development Goals, “Whether as goals, targets or indicators they are much more complicated, because I feel that the fewer the goals or targets, the more is the focus for the policymakers. In a country like India, we have less of a data problem, when we are talking about all-India macro-level data but have serious data problems when we look at sub-national, state-level data, and the data that is more disaggregated in the social sectors, so if we see at possibilities of monitoring SDG’s it’s going to be a much tougher task. One of the serious problems the country is facing is the availability of updated economic data since the last robust data set that the country has is still 2011-12.”

Debroy pointing on the functions of various governments in India says, “I want to draw your attention that in India we have a 3-tier structure, one is the Union Government, the State Governments and (rural) Local Governments, which is much centralised. So in order to bring development to this country, it’s not easy to dismantle the institution of centralisation, which has been for seven decades in this country. Although what this government has achieved is to move incrementally towards achieving the goals. If we look at the constitution of India we have separate sections on what union, state and local governments have powers to do, and it’s a constant surprise to me that there is no word called ‘Centre’ in the constitution, that is constantly being used by the journalists and commenters, as if there is something it is in the ‘centre’ and rest of the world is in its periphery, the word used in the constitution is ‘Union Government’. There is a lot of curiosity and obsession to know about the union government’s budgets but, where is it for the state government budgets that count to 70% of public expenditure that happens within the states. In almost every social sectors you have public investment schemes, which is to be invested by the states.”

In his final set of comments, Debroy on his book “Making of New India” expanded the achievements of the Concurrent Union Government by saying, “The book has about fifty papers that talk about various aspects of the Union government of India or the Modi Government, which has been there for the last four and the half years and has worked within the degrees of limited freedom, that dares to say I don’t care about parliament, judiciary and state, but has fulfilled to do several things that I would love to talk about. First, is providing the basic necessities to poor people who lacked access to a house to live, drinking water, electricity, gas connections, primary health centres, schools, forms of transports, financial products and so on.”

“India has 600,000 villages and out of these about a 125,000 did not have LPG gas, electricity, bank accounts and it’s commendable to find out that how many households have been electrified. Second, is to identify who are the poor people who need to be the beneficiaries of subsidies. Third, it is working on indirect tax side the GST, which is work in progress, and on the direct tax structure, a task force has been set up to look into it. The trouble with reforming taxes is the obvious one and the reason why the tax reform agenda does not get much traction is that everyone argues to remove exemptions for other people but retain them for themselves. A simplified tax regime with reduced compliance cost, will require harmonisation, standardisation, and elimination of tax exemptions. Today, India’s tax GDP ratio is 17% of GDP, and about 5-5.5% of GDP is lost because of tax exemptions,” Debroy added.

In a fireside chat with Amit Kapoor, Debroy addressed the question of removing income taxes by saying, “The number doesn’t add up, the people who have come up with a proposal have very unrealistic numbers i.e to remove income tax with a certain rate of taxation. If you would do that the actual tax range will be in several multiples to what it is now.”

Talking on the issue of corruption, Debjoy said, “Corruption means different things to different people, sometimes it is due to shortages, sometimes it is caused by eliminating a human interface and if you remove those shortages or human interferences the corruption goes. The prevention of corruption act uses the word ‘corruption’ for the expression of criminal misconduct. The fact is that prevention of corruption act is such that it does not protect the bonafide decision maker adequately nor it punishes the malafide decision maker adequately, so it does not encourage decision for the right piece of government, and nor punish wrong decisions, that needs amendment.”

The coverage was done by BW Businessworld on December 3, 2018.

Leave a reply Click here to cancel the reply